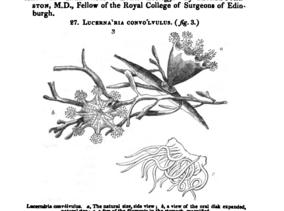 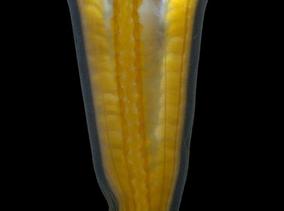 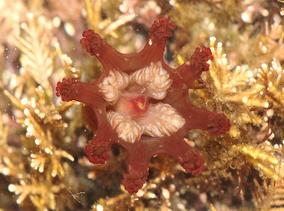 Staurozoa is a class of the phylum Cnidaria containing roughly 50 species commonly known as stalked jellyfishes or stauromedusae (the Greek roots stauro‐ and ‐medusa for cross‐shaped and the gorgon with snakes for hair, respectively). Staurozoans are smallish animals (1‐4 cm) that live in marine environments, usually attached to seaweeds, rocks, or gravel. The group has a largely anti‐tropical distribution, with the majority of species being found in boreal or polar, near‐shore, and shallow waters. Nevertheless, some species inhabit the deep sea, including at least one that is associated with mid‐ocean ridge habitats adjacent to hydrothermal vents. In addition, a small number of species have been observed in warmer tropical and subtropical water environments of the Atlantic, Indian, and Pacific Ocean basins. The vast majority of species are known from the northern hemisphere, but this may reflect study effort rather than a real geographic pattern in diversity. The 50 or so species of Staurozoa are presently classified in one order, six families, and 14 genera.